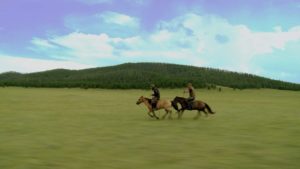 The Long Walk Expedition, an extraordinary undertaking by three young inhabitants
of the Łódzkie Region: Tomasz Grzywaczewski, Bartosz Malinowski and Filip
Drozdz, was inspired by the novel written by Slawomir Rawicz “The Long Walk”,
based on the accounts of Witold Glinski, a hero of the most famous escape from the
Soviet labour camp. The exhibition of photographs taken during The Long Walk
Expedition and a meeting with the young travellers organized on 16th February at
19:00 on the premises of the Regional Office of the Łódzkie Region at Marie-Louise
Square 2, will be an excellent opportunity to hear the account of their incredible road
journey.
Tomasz, Bartosz and Filip covered the distance of 8000 km, travelling on foot,
horseback and by bike from Yakutsk in northern Siberia to Calcutta in India, through
Mongolia, Gobi Desert, Tibet and the Himalayas, to follow the route taken by the
fugitives 70 years ago. Following the tracks of the “long walk”, they wanted to remind
the world of that extraordinary feat. The expedition was a tribute paid not only to the
characters of the book, but also to all of those, who didn’t manage to escape from
that ‘inhumane land’. Their adventures were documented in a movie diary titled “The
Long Walk 70 Years Later” which gives their personal, contemporary vision of the
wild world the escapees had to challenge in 1941. For the young travellers,the gulag
system is the very remote history, as they grew up in a democratic country.
Nonetheless they decided to get through one of the most wild and uninhabited places
on the Earth so that the world doesn’t forget about the victims of soviet labour camps
and people for whom freedom was the most important value.
The exhibition and the meeting devoted to the Long Walk Expedition was the first
event that launches the project Łódzkie Speeds Up, which consists of the series of
promotional actions organized in Brussels in co-operation with business partners,
social organizations, research institutes and institutions of culture, under the auspices
of the Permanent Representation of the Republic of Poland to the EU. Its objective is
to promote our region by acquainting our partners with its traditions, local art and
cultural diversity, and by presenting interesting social, artistic and economic
undertakings that may help to build up ŁÓDZKIE brand and show a creative
dimension and a dynamic growth of the Łódzkie Voivodship.
The project is co-funded by European Regional Development Fund under Regional
Operational Programme of the Łódzkie Voivodship for the period 2007-2013.