SINGING THE SPACE – VISUAL IDENTIFICATION OF THE EXHIBITION

Izabela Jurczyk’s latest project is a comprehensive development of visual identity for a unique exhibition which is a permanent exhibition presented at the MONOPOLIS Museum in Łódź. Izabela Jurczyk is graphic designer, a lecturer at the Institute of Graphic Design at the Academy of Fine Arts in Łódź with a design studio in Łódź, 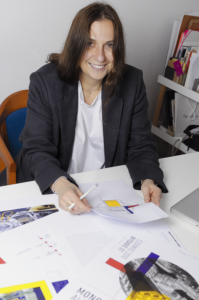 While designing the identification for this exhibition, the authors assumed that each of its visual elements should be a symbol related to the space it concerns. It was absolutely necessary to familiarize oneself with the history and current „narration” of this exceptional place.

The starting point of the identification was a combination of the alchemical and engineering sphere. On the one hand, a laboratory where new liquor formulas were developed, and on the other hand, huge production plants employing dozens of city residents. In addition, the aura of revolutionary and industrial Łódź and its avant-garde identity. Hence the reference to the vertical and horizontal divisions and colours so characteristic of the interwar Łódź avant-garde refers directly to neoplasticism and the activities of one of the most outstanding Polish sculptors – Katarzyna Kobro. It is the fascinati

on with the actions by this Artist that has been translated directly into the presented concept of identification and approach to its functionality.

The event is also accompanied by a 40-page newspaper designed by the studio. The booklet tells the story of an exceptional time and the people who made up the Polmos Vodka Factory in Łódź.

ABOUT THE PLACE AND PEOPLE

The exhibition MONOPOL.ALCHEMIA PRODUCTION will be presented in September in the spaces of the exceptional MONOPOLIS, whose originator is Krzysztof Witkowski, President of Virako.

„For us the history of this place was and is important. And the people who created it were not only the source of information, but also the heroes/creators of the history of the former plant of The Vodka Monopoly. We have conducted a number of studies that have allowed us to get a better understanding of the fate of Polmos over the years. Courtesy of courtesy, we have gathered the inhabitants of our city many exhibits, which are now part of the exhibition”. – stresses Krzysztof Witkowski.

Showing in an interesting way the rich history of the Vodka Monopoly in Lodz, whose heir and continuator was Lodz Spirits Industry Factory 'Polmos’ turned out to be a challenging  task. One of the curators, Marcin Kuropatwa, admits that „it was necessary to develop one’s own formula for the „genre” exhibition. Just like in a good drink, basic ingredients – obvious – had to be juxtaposed with „taste” additives in appropriate, secret, proportions. In this way a story was created. It is told with objects, memories, preserved documents and plans (obvious elements). Thanks to them we get to know the secrets of production and products, anecdotes related to work, but also social background, organizational culture and leisure. Historical objects are combined with modern ones (secret ingredients). Modernity blends with history, former employees with contemporary visitors, the colours of the plant with the colours of the avant-garde in Łódź. And all this is juxtaposed in secret proportions, with space for understatement, as it happens in alchemy…

We hope that it will be a place expressing respect for all who created it, for the employees and their families, shown in a wider context than the area and history of Polmos, inscribed in the cultural heritage of the city”.

CREATORS OF THE EXHIBITION MONOPOL.ALCHEMY OF PRODUCTION

Project initiator: Krzysztof Witkowski, President of the Board of VIRAKO, investor Monopolis

We are a group of enthusiasts who love beauty and can see it around. We look for inspiration in the world around us, in every shape, detail and shadow.

Our mission is to beautify reality by drawing on the best aesthetic and visual patterns. We have been creating visual identities that help to create the image of our clients since 1998. We develop publications and image materials, repeatedly awarded at the world’s largest competitions in Poland, USA, Germany and Italy. We’re spinning paper and printing! We are able to conjure up unique projects, because the success of our customers is a great satisfaction for us.

Our first prize was the Golden Chimera, which we received in 2003. Since then we regularly win the most prestigious Polish and foreign design competitions. Our achievements include a gold and platinum statuette in the American Creativity International Awards 2010. In 2010, our work took first place in the Marketing Kit Design category at The American Design Awards 2010. We are also winners of the FACES OF DESIGN 2011 in Belina and the prestigious international A’Design competition in Milan in 2015/2016/2017/2018/2019/2020.