RETURN TO THE MATRIX 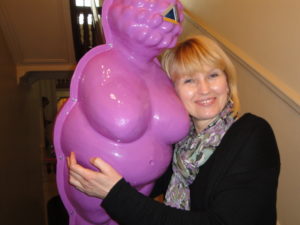 What is a matrix? Is there a connection between the matrix and femininity?
In the presented realization, the matrix is supposed to suggest some illusion and fiction.
Common understanding term “femininity” is an illusion, a semblance of femininity because it was not created by women.
Traditional view of femininity is connected with thought patterns imposed by patriarchal culture and reveals stereotypical beliefs created in phallic culture. Therefore, the matrix can symbolize the illusory feeling of women that they are the authors of the image of their femininity.
In the realization of &quot;Return to the Matrix&quot; the symbol of prehistoric beauty has been multiplied – the image of Venus from Willendorf, which is certainly far from contemporary aesthetic notions about women. It is a representation of a woman of full shape, who
today would be considered overweight, but in the times in which she lived, she was a synonym of health and strength. She was associated with prosperity and also with fertility. This is probably the first personification of dreams about the ideal woman.
Archaeologists considered that the statue had a ritual function – could symbolize a deity, that is why they called it Venus.
The artistic realization Return to the Matrixt; consists of three parts. The first one
presents plastic Venuses in silver, partially transparent. They resemble cases, cocoons
or sarcophagi. Inside are images of women, photographed on the wedding. They are
shown alone, without partners. For young girls the wedding day is at the same time
a day when femininity manifests itself. Dressed in wonderful dresses, they feel like
princesses. This day brings significant changes in a woman’s life. The objects exposed
in this way are accompanied by recordings of women’s statements about what femininity
is for them.
The second cycle of objects are dresses made of two parts. The top is a white, slightly
pink corset, which is a fragment of Venus; plastic body. The corset (from the French
“cors”, what meant “a body”) is nowadays considered as a symbol of enslavement and
bondage. In the past, it embodied the dream of ideal female shapes, it was supposed to
emphasize the qualities of a female body. It was an external, additional attribute of
femininity. He emphasized and accentuated femininity. Today, however, it can be treated
as a symbol of imposing certain norms related to the fact of being a woman.
The last part of the realisation consists of plastic Venus in dark pink and amaranth
colour. Each of them has a triangular eye. Venus has changed from the one who does
not see to the one who looks inside, from the blind to the one who has a look. Thanks to
her own gaze, Venus; figure makes sense. The spectator can find himself in the light of
her gaze and construct a new meaning for the seeing Venus. Or they can look inside the
eye and see what Venus; gaze says. The triangular eye contains a message, a written
idea of femininity. The image of this idea is repeatedly reflected in mirrors, creating a
symbolic echo of recorded words.
Femininity is a creation of culture. All the stereotypes referring to it were connected with
the changes that took place in it. The way women were perceived in a given culture had
a huge impact on the way women saw themselves. Recovering ones own gaze, going
beyond the matrix, seems to be a key issue in terms of subjective thinking about
femininity.